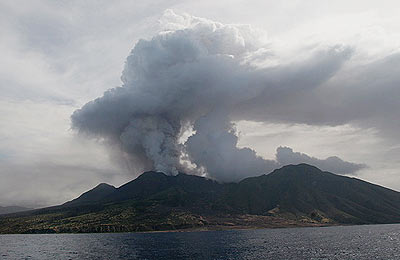 In the rush to get down to Antigua from the BVI’s two weeks ago, we sailed past a number of islands. Islands such as St. Maarten, Saba, St. Bartholemew, St. Kitts and Nevis. We’ll have to visit them on the way back. But the one island that stood out to both of us was Montserrat. On the evening we sailed past Montserrat, we witnessed the incredible glow of lava from the mountain. We couldn’t believe what we were seeing but it burned an image in our minds. We had to return to that island.

These islands, referred to as the Leewards, are the northern end of a volcanic chain which begins in Grenada. Antigua and Barbuda are the exception and lie on their own shallow bank outside the volcanic chain. However further south, near Grenada, the chain continues with an underwater Volcano. The most striking of these Leeward Islands is Montserrat for the simple reason it has an active volcano on it today. You can see it smoking and glowing for miles.

I know, every time we visit a new island I say this one is the best. David often just chuckles. However, I can honestly say Montserrat is one of the most unique islands in the Caribbean. It is lush and green with incredibly fertile soil. The country is able to support its population with a wide variety of fruit and vegetables. And part of the reason for such fertile soil- is because of the ash content (in the soil). The volcano in the south of the island deposits volcanic ash on the land, everyday (and our boat). 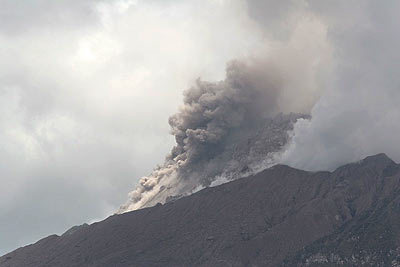 Ironically, with such an active volcano, people still remain on the island. The population of the island today is 5000, however, the population until 1997 was 12,000. Two eruptions of the Volcano in the summers of 1995 and 1997 changed everything. The capital city of Plymouth was completely destroyed by the eruption and today there is an exclusion zone from the Central Hills all the way to the south of the island. The effects of the eruptions can be seen all over the island and on the surrounding waters. For the Montserrat people who remain – they are resilient, resourceful and incredibly hospitable to tourists (the onlookers) coming to see the power of a living volcano. 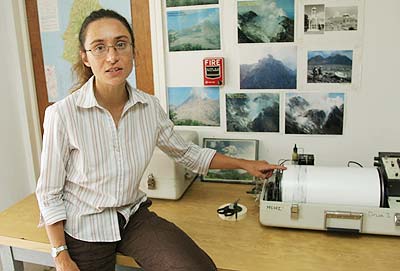 With our traveling companions, South Africans John and Elaine from s.v.didit, we arranged to meet Volcanologist and acting Director of the Montserrat Volcano Observatory (MVO), Dr. Vicky Hards, before touring the island. Dr. Hards is a scientist with the British Geological Survey who conducts and oversees research at the MVO. Dr. Hards is passionate about her work and is particularly keen to help local Montserratians understand what is happening with their Volcano. The Volcano is alternatively named Madam Soufriere by the British Geological Society’s Volcanologists. As with most ladies of distinction, she is impressive and will frequently make a spectacular showing for people to see from miles around. As part of their job at the Observatory, scientists and technicians monitor the volcano 24 hours a day, 7 days a week. They then interpret the data they collect and communicate their understanding to the general population. Following our get together, Dr. Hards paid a visit to the local Senior Citizens group to discuss the Volcano and answer questions. Check out our upcoming interview with Dr. Hards in Meet our new friends. 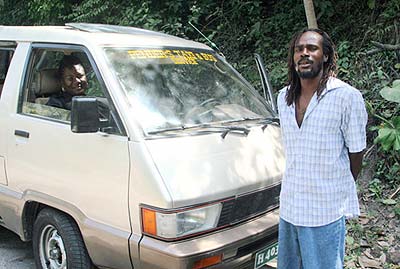 Dr. Hards suggested we visit St. George’s Hill to see the widespread devastation of the Volcano. So, with our colourful, dread-locked, local taxi & bus driver, Berresford Cabey, (aka Pender) we crossed a dried up river valley which was now strewn with huge boulders. A mud flow from the eruption had completely destroyed the valley. At the time of the eruption, these mud flows were just as dangerous as lava flows. We were now entering the Exclusion Zone. The area is open daily from 6:00 am to 6:00 pm with a sign that reads you enter at your own risk. As we wound our way up and down the steep slopes to St. George’s Hill, we passed Pender’s, his Mother’s and brother’s homes, all of which they were forced to abandon along with 1000’s of others. They were situated in a dangerous and vulnerable area and had to be abandoned. We could see furniture and belongings still inside some of the homes. It was an eerie feeling driving through this ghost town.

looking back at abandoned Plymouth from the water

From the top of St. George’s Hill, we had a spectacular view. We were all speechless. To our left we had Madam Soufriere, the smoking volcano. Leading down from her summit all the way into the former capital city, Plymouth, we saw the path of destruction she spewed – grey, hardened mud covered an area more than 3 km wide. The mud flow had buried the centre of the city and cut it in half. On either side of what had been the city centre were abandoned buildings – condominiums, hotels, houses, shops, community centres – all places we have in our communities today. All empty. The city was still. In a way, Plymouth had become a modern day Pompeii – the southern Italian city buried by volcano Mount Vesuvius’ eruption in AD 79. In our earlier conversation with Dr. Hards she reminded us of the differences in the two – today, Plymouth is gradually being buried and destroyed in the process by mudflow activity. Long ago, Pompeii was buried by ash fall from a single explosive event. A poignant reminder of how the earth continues to change.

As we looked back at the volcano we were reminded of our conversation with Dr. Hards. We could see the dome of the volcano with its grey smoke bellowing out while we stood and watched. So much power and energy. We were told that a new dome is building and it could bring more devastation to the island. Volcanologists are hoping it will erupt sooner rather than later, as the later it blows, the more dangerous and unpredictable she’ll be. However, to be honest, with all their data and analysis, they don’t have the answer to the question When.

With both these contrasting views on either side of us, we couldn’t help but wonder aloud how many people had lost their lives. Pender pointed out to us there were only 19 casualities from the two eruptions. As he said, This was a very sad day for my people. Are you with me?, his turn of phrase as he finished all his stories.

We’re with you Pender.