The Caribbean – blue skies, clear water, white sandy beaches…and garbage. And that’s why Cruisers, cub groups, pathfinders, university students, youth and church groups, local businesses and rotary group members all pitched in to take part in the annual International coastal clean-up sponsored by The Ocean Conservancy based in Washington, DC (visit www.oceanconservancy.org). Every year since 1986, between the second and third Saturday of September, people have been getting together for a few hours to clean up beaches and waterways of unsightly and dangerous garbage all around the world. Here in Grenada, we participated along with 33 other cruisers in cleaning up four beaches and 1 coral reef. We covered a little more than 2 miles and collected 30 bags of garbage weighing a total of 450 pounds. All over Grenada’s coast, a total of 14 beaches and 1 reef were completely cleaned up by hundreds of eager volunteers. Now that’s a good morning’s work.

It was a pleasant surprise to hear, over the VHF radio, someone asking for volunteers to come and join in on a local beach clean-up as part of the annual International coastal clean-up. It brought back memories from 20 years ago when I was working at the New Brunswick Museum as the Science Education Co-ordinator. I was invited to take part in the very first International coastal clean-up by helping to organize local beach clean-ups throughout the province.

This was a unique opportunity for several reasons. Firstly, it was the very first attempt to make this an international activity. An activity that Canada could play a big role in with its thousands of miles of coastline. Secondly, it was a great activity – simply to clean up unsightly garbage on the beaches. Thirdly, and more significantly, it involved documenting the marine debris (garbage) that was collected using special data cards. This was Science in Action – keeping track of what was collected and later looking at garbage as data. And here I am, 20 years later, more than 2000 nautical miles away from New Brunswick, participating in the same program at a local beach. Whoa! the coastal clean-up has really grown. Since 1986, this International coastal clean-up program has had volunteers removing more than 78.7 million pounds of garbage from 114,017 miles of shoreline in 118 countries! That’s a huge pile of garbage. 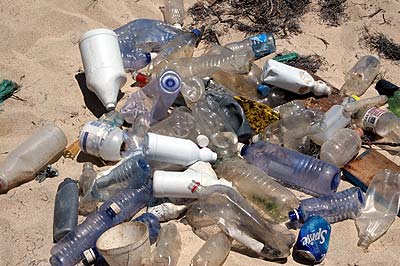 Where’s the source of the garbage?
Some people look at the ocean as a frontier to explore, others look at it as a place to make a living, while others look at it as a place to dump your garbage because it’ll sink to the bottom. Out of sight, out of mind. Well, not all garbage sinks. This stinky stuff shows up later on beaches or downstream on a river or just simply pollutes the water. In fact, marine and other aquatic garbage is considered to be one of the world’s most pervasive pollution problems affecting our waterways – including seas, oceans, rivers, even lakes and streams. However, not all marine garbage comes from dumping in the ocean. There are land-based sources for garbage in the ocean. Manufacturing plants and factories in large cities, sewer systems and storm drains in coastal communities all dump directly into the ocean. And of course, there’s the beach-goers who leave behind their mess. It’s all about an attitude towards the ocean. If it’s seen as a gigantic dump that no one really owns then who’ll take responsibility for keeping it clean?

Here’s a top ten list of the most abundant items collected during the annual International coastal clean-ups from 1996-2000. Can you identify the main source of where these items come from? 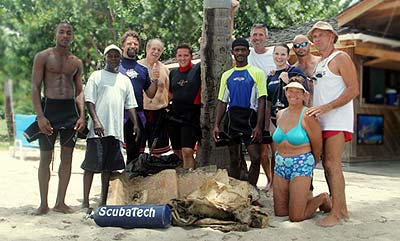 David participated with a group of Scuba divers cleaning up an under water area in Grenada.

How does it impact us?
Garbage in the water poses health and safety risks for people and animals. Imagine, swimming in water where chemicals or untreated sewer is dumped. Or you (or your pet) step on a needle from a syringe while strolling along a popular beach. We don’t often think about garbage when we visit the beach, but maybe our thinking has to change. Marine garbage affects tourists, too. You and your family plan a vacation on a gorgeous Caribbean island. You’re going to white sandy beaches and plan to snorkel, dive and swim. When you arrive, you discover the beaches and water are polluted. This is not what you expected. And local businesses, who depend on tourists like you each year, can’t make a living. How about the animals? Here in the Caribbean there’s a richness of different species of turtles, fish, whales, dolphins, seabirds, coral and plants. These too are affected by garbage. Thousands of animals die each year from becoming entangled in garbage or simply from eating it, thinking it’s food. Garbage gets wrapped around limbs, fins or flippers causing the blood circulation to stop. Animals entangled in garbage are vulnerable to predators. The garbage will likely slow them down if it’s trailing behind them, so they’ll have no chance of escape. Strangulation or digestion problems often occur from animals eating garbage. And poisoned fish eaten by seabirds goes directly into their food chain. Data collected from the International Coastal Clean-up from 1996 to 2000 showed that 1300 animals were found either alive or dead entangled in marine garbage. The evidence is clear, garbage in the water directly impacts marine animals and people. 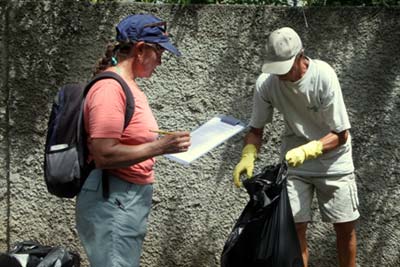 Recording the data of what garbage is collected while doing the clean up in Grenada.

Data collection cards
As mentioned, during the clean-up, garbage that’s collected is recorded on special data cards. The data cards are divided into 5 specific sections. The sections include: Shoreline and Recreational activities including garbage from beach-goers, festivals, sports/ games, and litter from streets and storm/drains; Ocean/Waterway activities covers garbage from fishing and boat operations; Smoking- related activities (I was surprised that this was a category on its own); Dumping activities includes appliances, cars and parts, and building materials; Medical and Personal hygiene are items flushed down the toilet (tampons, syringes and diapers).

Hog Island clean-up
Here on Hog Island, 6 cruising kids and 4 adults took part in beach clean-up action too. We divided into 2 teams and cleaned an area of less than 1/4 mile. On one end of the beach, team 1’s data largely included garbage in the Ocean/Waterway section. They collected a lot of fishing line, 34 oil/lube bottles, 5 pieces of rope, strapping bands, plastic sheets and lots of bottles. Team 2’s garbage was largely from beach-goers. They collected 165 beverage bottles (glass and plastic), food containers and wrappers, plastic bags, cups, plates, forks and 100’s of styrofoam containers. A total of 7 garbage bags were filled plus two bags of glass bottles. Interestingly, of the bottles that were found, there were very few bottles that were returnable. Beach-goers do not throw away bottles that are refundable when returned. So, getting money for returned bottles really does work.

Looking at the data collected from this clean-up, several suggestions could be made for reducing marine garbage and garbage at landfill sites. If the source of the garbage can be identified, then laws and regulations can be put in place. For example, bottlers on the island of Grenada would benefit tremendously if there were refunds for all glass bottles rather than for one or two types of bottles. In this way, there would be more of an available supply of bottles and would cut down the volume of glass going into local landfill sites. Signage at local piers detailing where to bring garbage (including oil/lube bottles) would be helpful for all boaters – recreational as well as commercial vessels. Styrofoam containers (which are not biodegradable) are commonly used throughout the island. Is it possible for local food vendors to switch to cardboard? And although this is a bit of a challenge, at all local beaches (even some of the more remote beaches) garbage bins must be in place and emptied on a regular basis. These suggestions are not directed only at Grenada but in many coastal communities around the world.

It was very satisfying to once again be part of a larger world-wide activity that has an immediate benefit and is a lasting scientific activity. You too, where ever you might be, can take part in this world-wide activity. We’d encourage you to get a group of friends together and participate. Lakes, rivers, and oceans all have shorelines and they need your help. Thanks Hog Island kids from s.v. Carapan, Eira and Purrfection for a job well-done. You made a big difference helping your local beach and the data you collected will help benefit Grenada’s environment in the future.