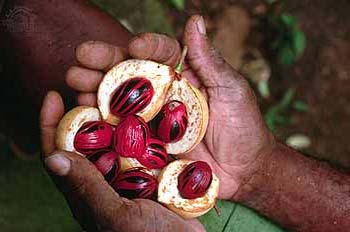 “Once upon a time, on a little island in the Caribbean called the Isle of Spice, there lived an old lady, way up in the mountains. Petite Mama was about four feet tall. Her eyes were dark and deep. Her voice creaked liked dry branches, and when she laughed it filled the air like earthy thunder. Although Petite Mama was tiny, she was a hard worker and very strong. She owned lots of land away up the mountains, planted with every tropical fruit you could think of. There were sapodillas, mangoes, bananas, star-apples, sugar-apples, guavas, oranges, soursops, and plums, just to name a few. And when these fruits were in season, she would go into the land and pick them and load them onto her donkey-drawn cart. Then she would wrap her head in a beautiful colored scarf, put on her favourite wide-brim straw hat and down the mountain she would go to sell her fruits…people would come from all over the island to buy her fruit because they were the sweetest and juiciest fruits you could ever want to bite into…Although Petite Mama had many fruit trees, her choicest crop came from her nutmeg and mace…”from, The Nutmeg Princess by Ricardo Keens Douglas.

So starts the Grenadian folktale. Mr. Douglas grew up in Grenada. He spent more than 20 years in Canada as a playwright, actor, storyteller and teacher. Now, he’s returned to his beloved country and from the little we have travelled of Grenada, it is easy to understand why Mr. Douglas and so many others who left years ago have come back. The Isle of Spice is truly paradise.

Grenada is the largest of the 3 islands (the country also includes Carriacou and Petite Martinique) in the southern end of the Caribbean volcanic chain that extends all the way from the island of St. Kitts. Because of its rich volcanic soil, mountainous regions and moderate weather, Grenada is particularly well-suited to grow herbs and spices – hence its name, Isle of Spice. At home, when I’ve bought dried spices, I’ve often wondered where they’re grown. Walking through the markets and shops I’ve found the answer – here. Ladies sell their spices in small bags and done up in bundles, on the street or in every grocery store, large and small – ground cinnamon, whole cinnamon sticks, turmeric, fennel, ginger, cloves, pepper, star anise, vanilla, bay leaf and of course, nutmeg. The spicy aroma is intoxicating as you walk through the market and you can smell the magic of the spices walking past small lunch counters and restaurants. It’s everywhere. 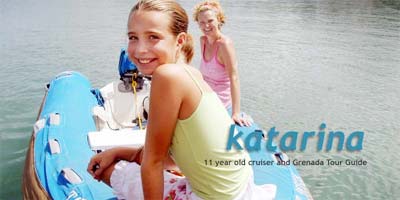 Katarina from sv Escape Velocity took Floating classroom along on her Island tour of Grenada. Hear (and read he podcast) all about Katarina’s mathematical tour of 3 Grenadian factories in our section,

Recently, we met a cruising family – Bill, Nina and Katarina onboard s.v. Escape Velocity – anchored here in the capital city of St. George. It’s a very convenient anchorage, near the heart of the city with its easy access to grocery stores, the city market, chandleries (shops that specialize in boat goods), and the numerous city buses. Many island tours are arranged from this anchorage. And that’s exactly what Katarina and her family took part in during their stay. They joined an island tour with a number of other cruisers, traveling from the NE to the SW corner of the island. Grenada is about 300 square kilometres (120 sq miles), so the full-day tour enabled Katarina to see some of the most spectacular parts of the island. Three stops that were of particular interest to her were the Nutmeg Factory, the Rum Factory and the Chocolate Factory. You might think it’s odd that an 11-year girl would find factories interesting. But it’s true because each one is incredibly unique. We invited Katarina to write about her adventure for the floating classroom. She enthusiastically agreed to do so, partly, I think, because it was so different from her regular school assignments. Katarina put together a written report and she recorded it as our very first podcast. We plan to take in a few of the tours during our stay here, thanks to Katarina.

The other big happening here in Grenada at this time of year is the preparation for Carnival. (Did you think I was going to mention hurricane preparation?). Carnival is celebrated in Grenada on August 15th and you can be sure we’ll be there, along with thousands of people from all over the islands. It’s been said that Grenada’s Carnival is more fun than the giant Trinidad Carnival in February. Whether it’s true or not, the build-up to Carnival is happening now. There are SOCA-fests (street parties), music competitions, the crowning of Carnival Queen, Sunday afternoon music fests and feasts in communities all over the island. In the early morning hours on weekends and as the sun goes down during the week, you can hear steel bands practicing throughout the city in community centres, open soccer fields and church halls. It’s incredible to feel the energy building as the big day approaches. Everyone’s talking about Carnival. We haven’t seen the costumes yet, but maybe that’s one of the surprises on the day. You can be sure that as we learn a little more about Carnival on this island paradise, we’ll be writing about it.