The Heart of Maritime Tradition

The Heart of Maritime Tradition 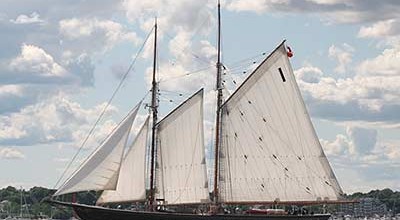 Boom…the canon has just gone off …. it must be 8 am. We’re anchored in the historic harbour of Newport, Rhode Island, at the foot of Fort Adam. Looking out of the portholes we’re completely surrounded by hundreds (maybe even 1000’s) of boats and some of the world’s most stunning ships, the Tall Ships, from around the world – Indonesia, India, Brazil, the Netherlands, Canada and the United States. The town of Newport is one of several North American ports playing host to the 2007 Tall Ships festivals. We had no idea they were coming. And our luck got even better yesterday, as we had the distinct pleasure of meeting the Captain and some of the crew of Canada’s own Bluenose II. Recognizing the Canadian accent and offering advice to fellow sailors, Captain Phil Watson invited us on board the Bluenose II to show us charts of Nova Scotia’s south shore and give us an early bird tour of Canada’s Grand dame of the sea. It was a thrill to see her varnish shine in the sun, with the Nova Scotia flag proudly displayed on top of the mast and the Canadian flag flapping off her stern. We were also introduced to the ship’s engineer, a fellow Newfoundlander from Trepassy. So, Amanzi continues to cruise in waters richly steeped in maritime history and meet amazing people as we continue north. I’ll do a little backing up to explain how we landed here.

Heading north
As we planned our route north back to Canada, David expressed a strong interest in visiting the east coast of the United States and Canada because of its rich maritime traditions. Although it was of interest to me, I knew it would add more miles and time to our return journey. But as David pointed out, how often would we have an opportunity to see this part of the world from the water. Reaching an agreement and with our destination decided, from Beaufort, North Carolina, we travelled inside North Carolina along the Intracoastal Waterway (ICW) to Norfolk, Virginia where we met up with our good friends Dean and Jill on sv Delilah. From Norfolk, together, we did a 2-day passage to New York City.

New York City
It’s hard to describe sailing into NYC harbour, particularly sailing up to the Statue of Liberty. I guess the one word that comes to mind is impressive. And you can’t help but imagine what newcomers and immigrants would have felt after a grueling 2 or 3 month voyage across the Atlantic Ocean. What a stunning sight to have Miss Liberty welcoming them to their new country. And then there’s New York City itself. The immensity of the city and its energy reaches right out into the water. And the traffic! Ferries, barges, tugboats, container ships, cruise ships, coast guard patrol boats, water taxis, and pleasure boats – all buzzing about the harbour, doing their business. It’s incredible! I was looking from one side to the other constantly as David easily steered a course through the rush hour traffic up the Hudson River to West 79th Street marina. Being at West 79th Street allowed us to be literally blocks away from Central Park, the museums, Times Square and the heart of “the big apple”. I could hardly wait to see it. And I have to say, we did it all. We walked until blisters slowed us down. Two days later, thrilled and exhausted from the hustle and bustle, we left NYC harbour, sailed back down the Hudson River, across to the East River through an area called Hell Gate, (because of the crazy current) and into the expansive, but well-protected Long Island Sound where the state of New York ends and Connecticut and Rhode Island begin.

New England
This region of the US east coast is called New England – Connecticut, Rhode Island, Massachusetts, New Hampshire, Vermont and Maine. It has its beginnings in the formation of America (originally, America was to be a colony of England). Along with those beginnings, New England has a long tradition of boat-building, fishing and all things connected to the maritime industry. So, this was the reason for our visit – to learn about these traditions.

Our first stop was in Mystic, Connecticut, at the famed Mystic Seaport Museum. We saw the remains of vessels dating back to the 17th and 18th centuries, as well as national heritage ships being restored. The museum is a landmark in maritime story-telling and restoration. Walking along the sidewalks in the town of Mystic, (as well as Bristol and Newport, Rhode Island) plaques on homes displayed dates of being built in 1700, 1751 and 1835. America’s War of Independence was fought and won right here and these houses likely housed soldiers fighting in that battle. And American Independence Day, the 4th of July, proudly honours that history and hard-won independence from England (red, white and blue adorn the streets and houses, everywhere). We were told that Bristol has the oldest 4th of July parade and celebrations in the entire country.

In Bristol, Rhode Island we visited the Herreshoff Museum to see what was left of America’s greatest boat yard. Two brothers, James and Nathaniel Herreshoff started the shipyard in the early 1800’s- James was the business man and Nat was the boat designer. In its hay day, the Herreshoff Manufacturing Company built gunboats for the navy, sailboats exclusively for the wealthy of New York and most notably the great J-boats that raced exclusively for the coveted America’s cup (comparable to the famous Stanley Cup). The J-boats were incredible 120-foot racing yachts- long, sleek hulls with gigantic sails (over 10,000 sq feet).

The America’s Cup International sailing regatta originated in England in 1851 as an invitation only International regatta for the rich yachtsmen of the time. The winner of the race took home the trophy and hosted the next race. After winning that first regatta, the American sailors of the New York Yacht Club hosted the race, renaming it the America’s Cup regatta, for many years after. It wasn’t until 1983 when the regatta was won by an Australian sailing team. And for the first time in its history, the America’s Cup left America (similar to Lord Stanley’s Cup). Since 1983, it has only been won by an American team once. This year, it was raced in Valencia, Spain between Switzerland and New Zealand – the Swiss winning it a second time. But at one time, Long Island Sound and Newport area played host to this most prestigious sailing regatta in the world.

The Herreshoff Manufacturing Company was the boatyard, designing and building sailboats exclusively for this one race, which was held every two years. Boatyards from other countries were doing the same, but Herreshoff was the reputed company simply because it built winners. Later, a second design team took over where Herreshoff left off and designed winners for this race – Sparkman and Stephens (Amanzi is a Sparkman & Stephens design and we think she’s a winner, too). As with many things, the designs changed and the era of the J-boat is over because it’s no longer the racing yacht of choice. But these old designs are still stunning.

Here in Newport, we took the opportunity to visit a number of the Tall Ships and watch the parade of sail on their final day. I was surprised to learn they are largely good will ambassador ships participating in summer visits to ports all over the world. They also provide training for young people interested in learning about sailing. Talking to some of the crew onboard the Tall Ships from both India and Indonesia, the Naval Academy cadets are the crew. In contrast, on board the other Tall Ships like Bluenose II, the crew are mainly students interested in sailing either as a career or hobby and are working onboard for the summer. When in port, the Tall Ships crew act as both guides and goodwill ambassadors for their country. And from the warm reception we received, they are doing an outstanding job. We’ll look forward to seeing them again – our paths might cross again as we both head north to Boston and Gloucester, Massachusetts. Gloucester is the one place on the eastern seaboard that is very similar to fishing communities in Nova Scotia and Newfoundland. It’s been a fishing community since the 1600’s when the Portuguese, Italians and Irish fished the Georges Banks and Grand Banks for cod in schooners not that different from the Bluenose. So, we’ve got a lot more to look forward to.