Anahata left the Royal Jamaica Yacht Club at midday on Friday, bound for Provenir, in the San Blas Islands, Panama. The wind was non-existent, so it was a slow start spent motoring out of the inner harbour. It was to be my second trip single-handing on the Anahata but this time it was 550 miles and Chris Parker was projecting medium-strength winds of about 15 knots.

By mid-afternoon, the wind had picked up enough to allow me to turn off the engine. The sea was very flat, so Anahata picked up speed nicely.  By evening, we were scooting along on a beam reach and over the next two days we had the most wonderful wind from the beam at about 15 to 18 knots. Before we knew it, we were doing 180-mile days.

In Kingston, I had met another yacht, Sea Angel, and they were one day ahead of me. As they had SSB radio, we were able to check in with them through the voyage. By Saturday evening, thoughts had begun to turn as when we would arrive in Provenir and it looked like it would be on Monday evening. When Anahata had left Kingston, I had thought we would get in on Tuesday morning, but as we were sailing so fast, it began to look as if we would arrive before sundown on Monday. The challenge was then to keep up our speed.

To do this, I kept heading south instead of along the rum-line, which was more west. Chris had told me that there was a storm towards Columbia, so the stronger wind would be more south or east. By Sunday evening, it was evident that I  had to turn for home and I bore off for Provenir. By 2 am on Monday, I discovered that I needed to go downwind more and therefore rigged  the spinpole on the genoa.

By 10 am on Monday, change was required once more, as we were still heading too far south, so a gybe needed to be performed. However, I got lazy and paid the price. Somehow I thought I would be able to do a gybe of the genoa with the pole without furling the genoa first. Before I knew it, the genoa sheet was wrapping itself around the forestay. After two frustrating hours, it was sorted it out but not before I had to cut the sheet free. I won’t make that mistake again.

Four miles out, I picked up Sea Angel on the VHF radio and they gave me directions to an easy anchorage where they would be waiting to help me in if I came in after dark.

I made it just in time, found Sea Angel and by the time I had dropped the sails and anchor, it began to turn dark. 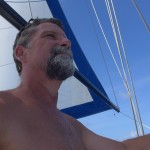 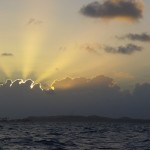 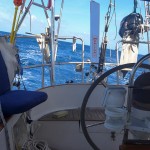 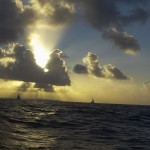