I’m thirty feet underwater and I should be thrilled. But all I can hear is Darth Vader breathing in my ear. There’s water in my mask and it’s going up my nose. I’m scared to death my mask is going to get kicked off, accidentally, by another diver. All I can think of is Will I be able to get my mask back on? Will I have enough time to make it to the surface safely without running out of air?Scuba diving is fun, David said. You’re really going to love it! I’m waiting for the fun to start, because this is not my idea of fun.

Being scared of the water comes naturally to me, a Newfoundlander. The reason – the water is ice cold back home. Who swims in the Atlantic Ocean in Newfoundland? No one. As a kid, when I went to the beach, I’d stand in the frigid water up to my knees until my feet were numb. That was the extent of swimming in the ocean for me. Many years ago, when the fishery was alive in Newfoundland, it was common for many fishermen not to know how to swim. The thinking was, If they ever fell overboard, they knew they wouldn’t survive for long in that cold Atlantic water. So, it was better to just slip into the dark depths without a fight.

Although I had a fear of water (you could also call it a healthy respect), it didn’t stop me from thinking I wanted to be a Marine Biologist in Newfoundland after I finished high school. I thought it would be exciting to learn all about whales. However, after a summer of working along side Uncle Norm pulling up fishing nets, I realized I just couldn’t handle this cold water environment. It chilled me to the bone. So, I gave up my dream of life on the water learning about those secretive, incredible mammals. Instead, I turned my attention to land animals and became a wildlife biologist. But, it never occurred to me that I could study whales in warm water. It wasn’t an option I considered, funny enough. It was only when David and I saw dolphins off our bow and hearing whales blowing in the distance that it occurred to me I could have had a career here. It made me wonder what my career would have been like, if I ‘d studied at a University here in the Caribbean. Life has a funny way of making you ponder the choices you’ve made…what if I’d done one thing instead of another…

By the time I completed my third and fourth open water scuba dives, I was relaxed and much more confident about my abilities of dealing with my mask. Listening to the sound of my breathing through my regulator (breathing apparatus), had now become more reassuring rather than noisy. And I saw stuff! I couldn’t believe this new environment with so much life. 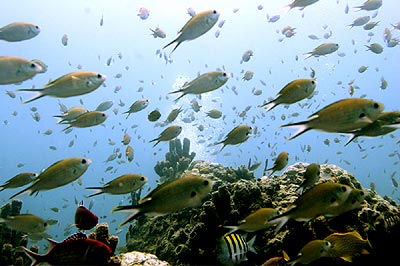 Swimming with the fish in my new environment.

Snorkeling let’s you see a part of this watery environment, but Scuba diving allows you to take your time, observe and get close to animals and organisms. On several occasions when David had returned from Scuba diving, we looked at the great photos he’d taken. And there was a longing on my part to see firsthand what he’d seen. Thankfully on my last two dives, I got a taste of it. I watched with amazement, on two different occasions, a moral eel poking its head out from its cavern. With its mouth gaping open, as David had described it, I could see the eel wasn’t interested in attacking me, but merely breathing and showing its curiosity. All of a sudden, a creature that is supposedly scary, is simply remarkable to watch.

I feel so lucky to have come full circle. It’s incredible to have come from a fear of the water to now be swimming in a whale’s world. Life is full of treasures that are just waiting to be found.