We’ve been here in beautiful Tyrell Bay on the tiny island of Carriacou for more than a month, now. You can tell we really enjoy it as we’ve been here twice since June. For me, it’s so much like home in Newfoundland. People are warm and friendly and the pace of life is relaxed. It must be an island thing. The community in the Bay where we’re anchored is called Harveyvale with a few houses circling the Bay and more houses scattered around the hills. At night, it’s something very special to see – in one direction, the sunset with boats at anchor and then turning around, you see sparkling lights scattered in the hills behind you. And with the Christmas season here, you see the seasonal lights around as well. Because we’ve decided to spend Christmas here, I’ve been keeping an eye out for festive or seasonal activities. 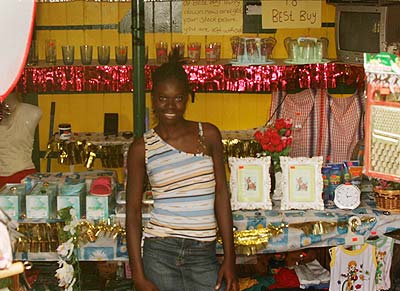 Kisha proudly stands beside her Christmas display in the store in Hillsborough. 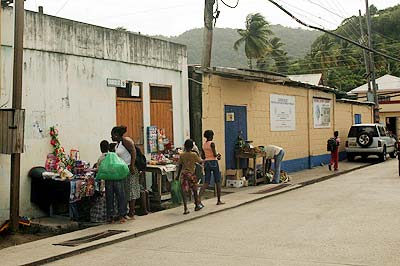 In Hillsborough, the larger community about 10 km from Harveyvale, the shops are decorated very simply. Shops might have one or two tables or shelves decorated with a seasonal tablecloth, tinsel rope, lights or red bows. There may be a very small selection of children’s toys but the toys are not the latest or most expensive. One shop has a stand-up Santa Claus just inside the door, which catches your eye as you walk by. On the streets, several people have set up small tables selling giftware they’ve either made or has been brought to the island by relatives returning from the United States or Britain. And reggae Christmas music can be heard on the radios of many of the buses (which are mini-vans). This is a Caribbean Christmas – little emphasis on material things – instead, it’s about spending time with family and friends and sharing what you have. And I can’t think of a better place to be.

Harveyvale Primary school’s tree all lit up courtesy of a donation by Mr O’Brien.

Here on the island, each community has an annual tree lighting ceremony to kick start the holiday season. With school closing the end of the first week of December, tree lighting ceremonies can start as early as that first week. Here in Harveyvale, David and I along with a couple of other boaters walked up the hill to the local Government primary school for their 2nd annual Tree Lighting ceremony. A local businessman, Mr. O’Brien, was asked last year to decorate the tree in the schoolyard and because he felt it was an important tradition to continue, he was back again this year with more lights and balloons. Following the customary countdown. the switch was flipped and the tree was alight to the sound of clapping and cheers. What a delightful sight! Along with the ceremony, children from the primary school put on a little concert. Sitting in the audience, we were surrounded by aunties, grannies, sisters, and cousins with the menfolk standing in the background, close to the Christmas tree. Under the Christmas tree, local refreshments were being served. And on one side of the parking lot a couple were selling homemade ice cream from their hand-cranked bucket. On the other side, women were working industriously BBQ’ing pork and chicken for sale. This wasn’t simply an event, it was a cultural celebration of music, singing, food, friends and good cheer.

The school choir performing at the school concert.

The concert was organized by the staff and students of the Harveyvale primary school. Although school had finished in early December, the staff and students returned to school everyday and practiced during their holiday time. As with many concerts, there were a few technical challenges – the main one being that the microphone cord was not long enough to reach the open presentation area. So, the MC invited the audience to pick up their chairs and move closer to the school steps where the concert would be performed. There were recitations of poems by students as young as 4 years old, and songs by the school choir, the local youth choir and the seniors in the community. There were performances of original dance routines, a fashion parade and messages of the meaning of Christmas. The concert wrapped up with a medley of traditional Christmas songs including Santa Claus is coming to town, Rudolph and We Wish you a Merry Christmas all with that distinctive reggae beat. It brought smiles to everyone’s faces and Mr. O’Brien closed the concert asking that this event continue to be a tradition in Harveyvale. I couldn’t agree with him more. Thank you Harveyvale for sharing your spirit of Christmas with us. 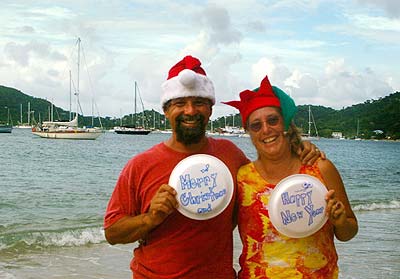 David and I would just like to say, thank you to our friends and family who have sent along greetings and well wishes. It’s terrific to hear from you. We’d like to wish each of you, a very Merry Christmas and may 2007 bring health and happiness to you all. Cheers.