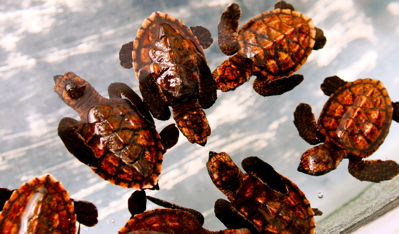 There are people in the world who feel that when they harvest and take from the earth for many years, there comes a time when they must give back to Mother Nature in some small way. Meet Mr. Orton King also know as Brother King to local Bequians or the Turtle man to local children and tourists . For many years, Mr. King was a fisherman throughout the Grenadines with his father and Grandfather. His Grandfather was known locally as a great fisherman. In fact, he was particularly good at catching sea turtles and passed his secrets on to his Grandson, Orton. After many years of fishing, Mr. King stopped and took a good look at his environment. He noticed that fish species were getting smaller, the coral reefs were dieing and he realized that those incredible ancient sea turtles were declining rapidly in numbers. So, he retired from fishing and in particular he stopped catching turtles. And he decided to give something back. For the last 12 years, Mr. King and his wife have been rescuing and raising sea turtles as hatchlings and returning them to the sea where they can thrive and produce their own young. Together, they have created Old Hegg Turtle Sanctuary and to date, they are responsible for rescuing and releasing more than 2000 individual turtles that were either threatened or the species was nearly endangered in the southern Caribbean Islands.

Mr KIng explaining to Kim how the turtles are raised in the various tanks.

Mr. King is doing this work because he has a passion. However, his work is not without controversy. He is not a Biologist and is not collecting data or specific Turtle information. Scientists who study Turtles are not in complete support of what he’s doing because he’s interfering with Nature. In addition, he’s not collecting valuable data which could shed light on their biology. But, this doesn’t deter Mr. King. He sees his work as being helpful and his commitment to Turtles is evident in his daily work. He reminded us, I’m not going to be around in 200 years, so what does it matter about collecting data..

Where do the turtles come from? The day before we visited Old Hegg Turtle Sanctuary, Mr. King received a call from 2 local tour operators on Palm Island – a small beach resort near the Tobago Cays in the southern Grenadines. The employees called to say that turtle eggs had hatched on the beach and some of the hatchlings were running to the sea while others were running towards the resort because they were confused by the lights. Mr. King’s response was immediate. In his speed boat, he headed to Palm Island and collected almost all the day-old Hawksbill turtle hatchlings. When we visited him at the Turtle Sanctuary the next day, these babies were the latest addition to the more than 100 turtles at the Sanctuary. Other hatchlings ranging in ages from 6 to 10 weeks old were in their own designated pools, in the sanctuary. Looking around, we could see larger pools, where there were at least a dozen 1 and 2 year olds swimming lengths in their own pool. And there were about 12 injured turtles of differing ages in individual pools on the far side of the sanctuary. In the main central pool there were at least 25 six-and seven-year old turtles almost ready for their release. No turtles were collected during 2004 or 2005 when the islands were hit by two hurricanes. Sadly, Mr. King speculates that all the turtles were wiped out in those two years. And finally, off to one side, Mr. King had his two favourites – his pet, 12 year old Busy Body who will be released later this year. Busy Body has been with Mr. King from the time he started the Turtle Sanctuary. Not far from her pool, the Sanctuary’s name sake, Old Hegg swims contentedly alone in her own pool. She will never be released because of a shell and front claw deformity. 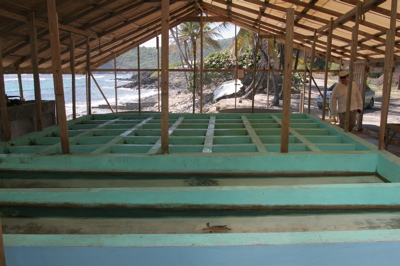 When the tutrles are one or two years old they are put in the larger tank so they have more room to move. We watched as they swam their lengths.

Care and Feeding The day starts very early for Mr. and Mrs. King. There are alot of mouths to feed and water to change and pools to clean. (Not to mention the other animals in the fields just outside the Sanctuary – goats, sheep, chickens and a range of other farm animals.) It’s a busy place. For the turtles, their main diet is tuna and sardines (yes, they love, Canada’s very own Brunswick brand – nothing else will do). And of course fresh sea water. Because the Sanctuary is located on the edge of the ocean, fresh sea water is pumped into the pools continuously. This pumping action allows for the pools to be flushed all the time. This is different from a fish hatchery where sea water is abundant but there are millions of species in close proximity to each other. Because there is space and very few individuals, Mr. King does not have to worry about disease and infection spreading through the population. As a result, the turtles are not given antibiotics (as is often the case in fish hatcheries). The animals are handled very little – only when moving or transporting them from one pool to another or cleaning algae from their shell. When they are released, the turtles have not become used to human touch and are therefore able to care for themselves.

Turtle release Turtles can live a very long time. Mr. King speculates they can live to be about 200 years old. (Nemo’s dad thought they lived for at least 150 years?) So, the hatchlings and others turtles in the Sanctuary will likely outlive all or us. Mr. King emphasizes they’ll likelyoutlive us, that’s because their survival rate is not high – only one in 3000 turtles will live to the age to reproduce (they are sexually mature around 25 years old). So, Mr. King reckons if he can hang onto them for 12 years, then they’ve got a pretty good shot at reaching the age when they can start producing their own young. And to give them one more boost, the turtles are returned and released on the beaches where they were found. 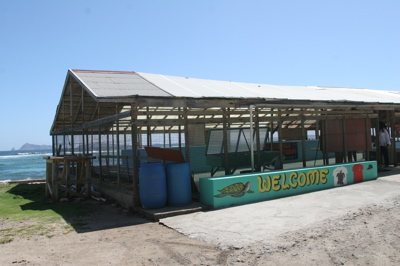 OLD HEGG Turtle Sanctuary sits on the ocean’s edge on the windward side of Bequia Island.

It’s incredible to see what two people can do. Mr. King had an idea that he could help turtles survive and it all started with catching them first to kill. Mr. King recognized the specialness of these creatures with their unique ability to survive for so long. It was this respect for something greater than himself that Mr. King wanted others to witness and understand. One man has dedicated himself to a species’ survival. That’s something quite incredible. On behalf of generations of children who will also be able to watch a species survive, thank you, Turtle Man.