The engine was fixed in Bermuda by a genius of a mechanic from Sri Lanka. Its electronic shut-off switch has a solenoid that is activated but, unfortunately, the spring that pulled the switch back had become stretched and so did not pull back enough, resulting in the engine alway trying to shut down.

As my crew, Whit and Dana, had decided to leave the boat in Bermuda, I was faced with my first long-distance offshore trip on Anahata. It was slightly comforting to know that there would be two other Salty Dawg boats out there with me. It was a mad scramble to get everything sorted and squared away in preparation for leaving Bermuda. 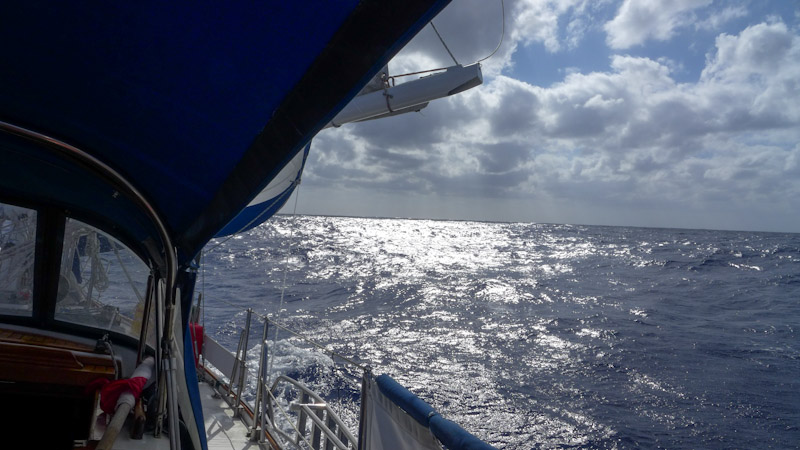 The plan was to be the first out of the harbour, followed by Ruffian. Finally, it was good to go and it was a great feeling to be able to start the engine and motor out. Flight plan and Ruffian had been doing weather research and the projection from Chris Parker was that it was going to be a beam reach blast all the way down. As I had yet to sort out the tiller pilot autohelm rig for the self-steering monitor, it took a bit of running around before the sails were up. When I could finally relax, Anahata took off. All three boats had AIS for the first day and it was comforting to be able to see them on the electronic navigation chart.

One of the things I had done in Bermuda, on the advice of the Ruffian crew, was to switch my navigation programme to ‘Open CPN’, which is free and can reach any types of charges. Many long-term cruisers have switched to it, as it has a simple navigation interface and accepts all AIS information. AIS is an electronic system that sends out information about your boat and its speed direction, and you can receive information from and about other boats and ships. There are two types: one is just a receiver while the other is a transceiver that both receives and transmits. Anahata has a transceiver. What is also great about the AIS is that you can set an alarm that goes off on another vessel when you are in range. As a single-hander, it was a fantastic and enabled me to get some sleep.

The first excitement of the trip was on the evening of the second night, just as it started to get dark. I was below and heard a loud bang. Once up on deck, it was discovered that the gooseneck bolt,  the connection point between the boom and the mast, had come out. The net result was that the front of the boom was no longer attached to the mast. The only thing that held it together was the main sail, which was connected to both. I was immediately concerned that the sail would rip and the first step involved releasing the main halyard and slightly dropping the sail. This, however, dropped the entire sail, including the boom. Thankfully, Anahata has a boom gallows, so I found a sail tie and secured the back of the boom to the boom gallow. Then I went to the front of the boom and pushed it backwards until it lined up with its correct position on the mast. Unfortunately, the boom was too heavy to lift and put the bolt in at the same time. The solution was to jury rig a spare halyard around the front end of the boom and lift it slightly, allowing the bolt to be put back in. There was a very big sigh of relief when I got it back in place. 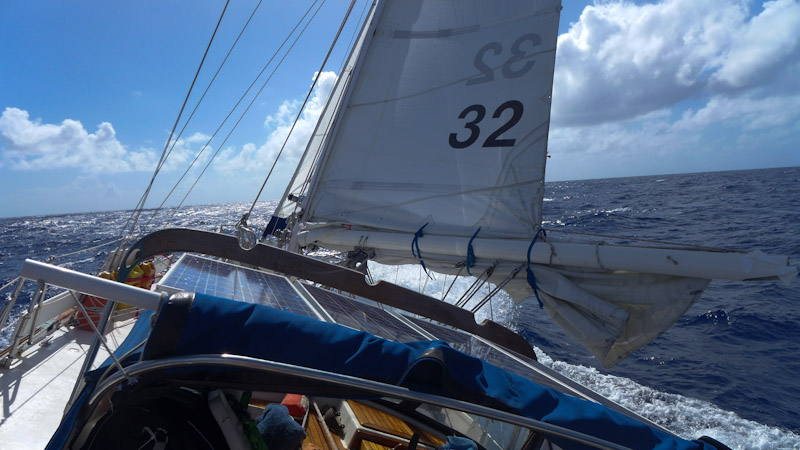 Three reefs in main and still healed pretty back. No wonder Buddy got upset.

The wind started building to over 25 knots and we were rocketing along. The monitor was doing all the hard work but the only problem was that we were close to reaching at this point and we started launching off the top of the swells. So I bore off slightly. What would have been a better decision in retrospect was to reef down more and slow down a bit. Sometimes it was hard to let go of having had a sailboat racing background. The third morning presented a new problem when I awoke to find water under the navigation seat where most of the electronic equipment was housed. Not good. Where in hell was it coming from?

We had been sailing hard at about a 20-degree heal, so the first step was to flatten the boat. Three reefs were put in the main, the genoa was rolled out, the stay sail pulled and we bore off from the wind. There was a big slow-down in speed. The next step, after sponging up the water under the nav seat, was to start pulling apart the boat to find the source of the water. Initially, I thought it was coming down the back of the electronic panel, so I chiselled out two inches near the base hull beneath the nav table but found no water. It was also dripping from the ceiling, which really confused me, as a leak could not be seen around the hatch above the galley. The end result was that the source was never found on this passage but since I had slowed down and flattened the boat, it had diminished.

The final excitement of the trip was at 6pm, 120 miles from BVIs, when one of the monitor wind self-steering lines chafed through. This always seemed to happen as it was getting dark. My first reaction was that it was going to be a long trip into BVIs, as I would have to hand steer. After 20 minutes of it, I began to think that Slocum and others had sailed without fancy self-steering gear and maybe there was a way to sail Anahata without the wind self-steering. I let Ruffian and Flight Plan know what was happening and suggested that we check in with each other every three hours. It was a great sense of comfort knowing that there other boats in the vicinity whose crew knew what was happening on Anahata.

After an hour of playing around with the sails, I found a way to make it work. I put a third reef in the main and let it all the way out, then pulled the genoa in a bit. Eventually, the the helm felt really soft and I decided to let go of it and see what happened. The result was that the boat at first wandered through about 60 degrees but, after a time, the oscillation began to diminish. Our speed had slowed down but Anahata was sailing herself at 120 degrees to wind at 4.5 knots. Hurray, I could get some sleep, but set my alarm every hour to check the sails before instantly falling asleep again. By sunrise at 6 am, it was time to get the boat moving again, as the wind had dropped. I made a big pot of coffee, filled up my mug, unfurled all the sails and set about hand steering the rest of the way into the BVIs.

The final test was working out that something had fouled my prop somewhere on the trip. While I could run the engine, I could not put it in gear. I needed to dive on it and as the Virgin Gorda entrance was a bit narrow, I would have to anchor out somewhere to clear the prop before entering.

On the final morning, I was in VHF range of Ruffian and was speaking to Fiona via VHF, explaining my situation about the engine, but my real concern was my cat Buddy, as she was looking particularly weak. She had not eaten for five days and that last morning it really got to me so I asked Fiona to try to find out if there was a vet I could  call when we got into BVIs. 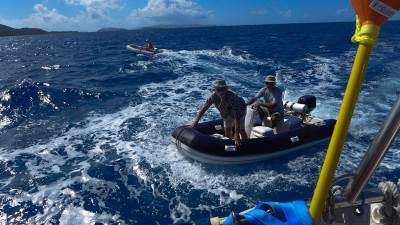 As I approached the entrance, two dinghies came out and three fellows jumped on. They helped to take down all the sails while the dinghies were tied along either side and then proceeded to motor us into the anchorage at the Bitter End Yacht club. Once we were all secured to a mooring ball, it was finally time to relax. The best news was that within five minutes, Buddy was back to her normal self and eating. The lesson learnt was that she is a down-wind sailor or, rather, you must not heal more than 15 degrees. I guess its hard to use a cat box at a great heal.

As it happens, another Salty Dawg cruiser, already at the Bitter end Yacht Club, heard our conversation and before I knew it, they had rustled up two dinghies to help Anahata through the Virgin Gorda entrance and all the way into the anchorage.

Thanks to Stray Dawg, Ruffian and Flight Plan for all the help during the trip. You were amazing. 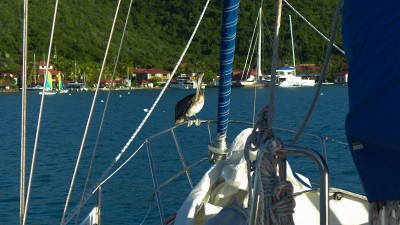