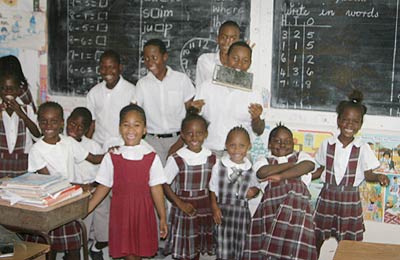 When you unexpectedly come across a special place, there is something about wanting it to stay like that – special, yet somewhat untouched. That’s how I felt about Mayaguana, a quiet, peaceful Out Island in SE Bahamas. The welcome sign in Abraham’s Bay, one of the smaller communities, reads: Welcome to Mayaguana, home of KIND people. It’s a wonderfully accurate motto, too.

This Out Island is surrounded and protected by inner and outer reefs with its shoreline of long stretches of white sand. To most, Mayaguana is a paradise, however, because of the reefs, to others, it is a treacherous island in the Atlantic Ocean. Mayaguana has a distinct history of stories of shipwrecks. As recently as 2 weeks ago, 2 catamaran sailboats set out for Mayaguana from Georgetown, just like us. Sadly, their trip ended in tragedy, as both boats ended up crashing into the reefs around the northern end of the island in high seas (3- 4m) and high winds (25 – 30 knots). Two local islanders heard their distress calls late at night and responded. Talking with the islanders later, they told me this was something they were used to doing, at least 3 or 4 times a year. I’m sure when the boaters called their distress, it probably seemed like there was no one out there but what a relief when the local islanders were there to help. All people on board both boats were rescued and were okay, however, their boats were destroyed. 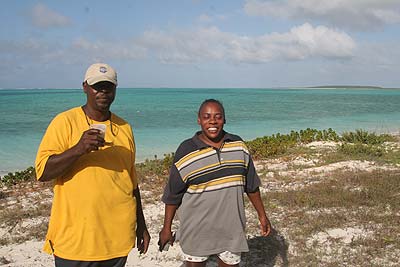 Glen and his cousin, ambassadors of Mayaguana

Realizing that we were going to be anchored at the island for a several days, a number of us, who were traveling together, decided to explore the island. We met up with Glen, one of the islanders who was instrumental in the recent boat rescue. He calls himself the island Ambassador. He knows everyone (all 300 islanders) and is one of those fellows who has his hand in all kinds of business ventures around the island. He is happy to tour people around the island in his pick-up truck and help boaters find the things they need. Glen made it possible for all 5 boats we were traveling together to get fuel and groceries. This was a big job. He also took the time to introduce me to the local school Principal, Mrs. Bain. I visited the Elementary school with its 3 teachers and 38 pupils. Happily, I spent part of the afternoon with the Grade 1/2 class. The children proudly showed me their work, I talked about Canada, and showed them how I reached their island from Toronto using their class globe. I finished my visit reading a story about a snowy day. The students had a difficult time understanding why we lived in a cold climate. And I have to admit, sometimes I do too.

Feasting with friends
While I was visiting the island and making new friends, David and the other guys were hunting the waters and reefs for fish, conch and lobster. Over the five days of being at anchor at Abraham’s Bay, we shared meals of conch salad, grilled Mahi Mahi, fried Grouper and pan-fried Snapper. We couldn’t believe how fortunate we were in this island paradise – good company, new friends, a beautiful location and amazing food.

Okay, now in case I’ve painted a picture that these meals are all easy-peasy, I must mention that several precautions must be taken before we bring any fish to the table for such a feast. Firstly, you have to be able to identify the many different reef fish and know what is edible, because many reef fish carry a toxin called cigutiera which will make you very sick if eaten. Secondly, after spearing a fish, you must not stay in the water for long. Blood from the speared fish will attract sharks for miles. David saw a Bull Shark while diving and a Nurse Shark and a Hammerhead Shark were near the boat as we were leaving. Thirdly, while hunting, often you can be followed by Barracuda – they love to hunt for the same thing you’re hunting. And they have a mean bite!

New destination
With a weather window opened up, the flotilla heading south was about to change. Three of us (s.v. Delilah, s.v. Savvy and s.v. Amanzi) were heading directly to the Dominican Republic and the other 2 boats (s.v. Eira and m.v. Dreamweaver) were heading to the Turks and Caicos first before continuing south. We said so long for now, knowing that it was not good-bye, as we’ll be running into them further south. It’s just the way these traveling routes can be.

The sail to our destination in the Dominican Republic is 40 hours or 190 nm from Mayaguana. This is our first time doing 2 nights at sea. And we have complete confidence in Chris Parker’s predicted forecast (of the Caribbean weather network) calling for light winds on the first night, then picking up the second. The wind will be out of the NE which is just perfect for our direction. You can bet we’ll have our fishing line trolling behind the boat for the duration of the trip too, enroute to a next new country.